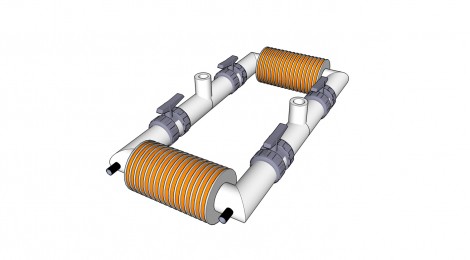 Ferrofluid pump has no moving parts

Written by Tushna Commissariat, a reporter for physicsworld.com

Scientists in the US have developed a new way of pumping ferrofluids without the use of any mechanical components. They claim that their technique, dubbed “ferrohydrodynamic pumping”, can be easily scaled up or down to be used in microfluidic devices or industrial-scale pumping devices, and anything in between.

Ferrofluids were developed by NASA in the 1960s as a way to non-mechanically pump fuel in space. They fall under the umbrella of “smart fluids” – fluids whose properties can be changed by applying a magnetic or electrical field. Today, ferrofluids have a wide range of applications, being used liquid 0-rings, in high-end audio speakers and computer circuitry, as well as biomedical devices.

Ferrofluids are colloidal liquids made of nanoscale ferromagnetic particles suspended in a carrier fluid. They respond to magnetic fields while retaining liquid properties and can be manipulated by external magnetic fields. The essential difference between ferrofluids and magnetorheological fluids (MR fluids), another type of smart fluid, is the particle size – the nanoparticles in the ferrofluid are suspended by Brownian motion and so, do not settle under normal conditions; while the particles in MR fluids are of the micron-scale and are too heavy to be suspended by Brownian motion.

When ferrofluids are exposed to a magnetic field, the bulk of the liquid becomes magnetized and its surface acquires a shape to minimize the energy of the system. Sometimes, exotic spikes form on the liquid’s surface in the presence of strong magnetic-field gradients – which has been exploited in some interesting special effects and art projects. “If you have ever seen a movie scene in which there is a strange, black liquid creeping towards the protagonist, seemingly on its own accord – think X-Files – there is a good chance that the liquid is a ferrofluid,” says Hur Koser, one of the authors of the study recently published in Physical Review B.

Koser and colleagues of the University of Georgia and Massachusetts Institute of Technology in the US came up with their pumping design after Koser became interested in the designing of tiny magnetic-field generators during his PhD work. He says that a common query that puzzled his team then was, “Can these machines be used to pump fluids in microfluidic devices?” Creating a tiny motor to pump fluids is complex, but Koser realized that if the fluid itself was magnetic, it could be actuated and pumped without any motors. Koser and colleague Leidong Mao then used computer simulations to work out an experiment to demonstrate such actuated pumping, and built their device. “In retrospect, the experiment was the easy part. The difficulty was in taking into account all of the nonlinearities associated with ferrohydrodynamics in our computer simulations, which took considerably longer – almost years – to conclude,” explains Koser.

The apparatus comprises a closed fluidic loop that they built using PVC pipes bought at the local hardware store. They added manual valves to the loop to stop the circulating flow whenever necessary as well as two pressure ports to measure the pressure created by the electrical windings – many turns of copper tape around the circumference of the tube – in a differential fashion. “We passed electrical current through the windings to create a magnetic excitation that travelled along the length of the tube on one arm of the fluidic loop. The currents were driven by a stereo amplifier, purchased from a local music store. The ferrofluid used was a cheap, commercially available formulation based on mineral oil and magnetite nanoparticles,” says Koser, explaining just how simply their device was built.

The electromagnetic coils generate a magnetic field, which the researchers refer to as a “travelling wave”. Mao explains that these fields rotate the nanoparticles within the liquid. “We can control the strength, frequency and direction of the travelling waves, which in turn result in locally rotating magnetic fields within the ferrofluid. The field is set up to generate a gradient of nanoparticle rotation – those deeper inside the pipe rotate slower than those near the surface. This spin gradient sets up a shear gradient within the ferrofluid, propelling it linearly,” he says. A large spin gradient means that each particle’s rotations are highly coupled with those of its neighbours, while a zero-spin gradient means particle’s rotations do not affect each other at all.

The researchers also noted a discrepancy between their simulations and observed pumping characteristics. They found that the individual nanoparticles could not have been responsible for the measured pumping because the flow that they observe requires coupling between the physical rotation of magnetic nanoparticles and the surrounding liquid medium. So they deduced that a small percentage of magnetite nanoparticles must have dynamically formed short linear, reversible chains caused by the travelling wave, and that it was the rotation of these chains that lead to the differences observed.

The pumping method that the researchers have developed can be used for almost all types of ferrofluids, whether oil or water-based. Because there is no secondary liquid to pump, the ferrofluid can be optimized individually for maximum shelf-life and optimum pumping. They believe that their technique could lead to compact, integrated and efficient liquid-cooling schemes based on ferrofluids that could be used in miniaturized cooling systems for computers. “Your laptop could be twice as thin and a third lighter and faster with more efficient cooling,” says Koser.