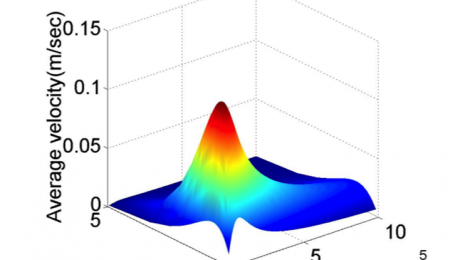 (PhysOrg.com) — Used in Hollywood and the advertising industry to create exotic special effects, ferrofluids are seemingly magical materials that are both liquid and magnetic at once. In a study published today in Physical Review B, Yale electrical engineering professor Hur Koser and colleagues from the University of Georgia and Massachusetts Institute of Technology demonstrate for the first time an approach that allows ferrofluids to be pumped by magnetic fields alone. The invention could lead to new applications for this mysterious material.

Developed in the 1960s by NASA scientists seeking a non-mechanical method for moving liquid fuels in outer space, ferrofluids are made up of magnetic nanoparticles suspended in liquids such as oil, water, or alcohol. Though numerous industrial, commercial, and biomedical applications for ferrofluids have since been created, the original goal-to pump liquids with no machinery-remained elusive, until now.

“We have shown that ferrofluids may be pumped at controllable speeds in closed-loop geometries without any mechanically moving parts,” says Koser. The discovery, based on work funded in part by the National Science Foundation, is a culmination of many years of research, and is based on a theory Koser proposed in 2005 to suggest that travelling magnetic fields could enable very fast pumping of ferrofluids.

Following on successful computational simulations, the so-called “ferrohydrodynamic pumping mechanism” that Koser and colleagues have now validated could be used in systems as tiny as microfluidic devices, or as large as industrial-scale pumps, he says. It could also be used to cool computers more efficiently.

The ferrohydrodynamic pump method works when electrodes wound around a pipe force magnetic nanoparticleswithin the ferrofluids to rotate at varying speeds.  Those particles closest to the electrodes spin faster, and it is this spatial variation in rotation speed that propels the ferrofluid forward. “We don’t rely on any other material; no magnets, nothing moving but the ferrofluid that we’re pumping,” Koser says.

Koser and colleagues demonstrated the simplicity of this “hands-free” pumping scheme using a stereo amplifier, ordinary plumbing materials from the local hardware store, and a commercially available mineral oil/magnetite ferrofluid that is easy to make and safe to handle. “Pumping systems can be much cheaper and easier to manufacture when liquid can be moved without machinery,” Koser notes.

“The ferrofluid pumping scheme we demonstrated is simple, robust, and very inexpensive,” says co-author Leidong Mao, a former graduate student in Koser’s lab, currently with the Faculty of Engineering at the University of Georgia. Their approach, Mao notes, could lead to highly compact, integrated, quiet, and efficient liquid cooling schemes for portable, high-performance consumer electronics. For instance, ferrofluid cooling would eliminate the need for fans and heat plumbing inside computers, enabling further miniaturization. “Your laptop could be twice as thin and a third lighter and faster with more efficient cooling,” Koser says. Novel medical applications, such as cell sorting, might also be enabled by biocompatible ferrofluids, he adds.

Other co-authors include Shihab Elborai, Xiaowei He, and Markus Zahn from MIT’s Laboratory for Electromagnetic and Electronic Systems. To read the paper, Direct observation of closed-loop ferrohydrodynamic pumping under traveling magnetic fields, see the current issue of Physical Review B.