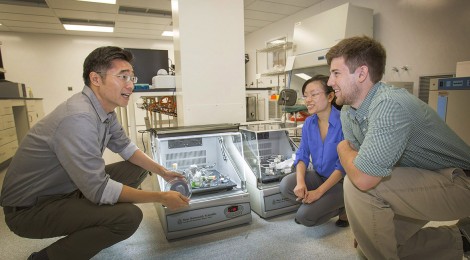 The University of Georgia College of Engineering has presented its inaugural Faculty Fellow Awards to associate professors Leidong Mao and Joachim Walther in recognition of their excellence in scholarship.

“It is a distinct honor to present our first Faculty Fellow Awards to Drs. Mao and Walther,” said Donald J. Leo, dean of the College of Engineering. “They have distinguished themselves through the development of robust and growing research programs that are attracting growing recognition both inside and outside UGA.”

Mao joined the UGA faculty in 2008. His research interests include nanoscale magnetism and its application in biomedical applications such as cell sorting, single cell study, droplet microfluidics, hyperthermia and magnetic nanomanipulations. He received the National Science Foundation CAREER Award in 2012.

Walther has been a member of the UGA faculty since 2009. In February, he was named a recipient of the Presidential Early Career Award for Scientists and Engineers, or PECASE, the highest honor bestowed by the U.S. government on science and engineering professors in the early stages of their research careers. Walther received an NSF CAREER Award in 2012 for his work to improve the quality of qualitative research in engineering education.

Each Faculty Fellow Award includes discretionary funds the recipients can use in advancing their scholarship. In all, named fellows cannot comprise more than 10% of the College of Engineering faculty.