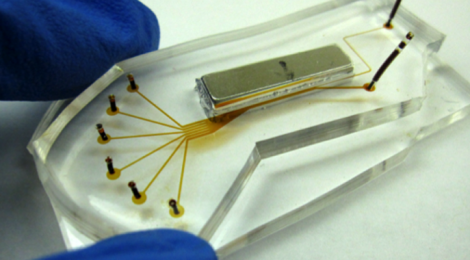 A lab in the palm of your hand

In order for cancer to spread, individual cells must break off the original tumor and hitch a ride to other parts of the body through the intricate network of arteries, veins and capillaries that make up the circulatory system. These marauding cancer cells then act like seeds by attaching themselves to fertile tissues and sprouting new colonies—a process called metastasis.

If doctors had an easy way to find these rogue cells in a blood sample, they could better evaluate how advanced the cancer is and what treatment would be most effective. But it’s not that simple. One milliliter of blood from a cancer patient usually contains less than a dozen cancer cells, which are easily lost amid the billions of red and white blood cells packed in the sample.

Now, researchers at the University of Georgia are developing a new technique to find these and other harmful agents using advanced nanotechnology. Their work, supported by a grant from the National Institutes of Health, promises to make blood diagnostics faster, cheaper and more portable.

“Right now, the detection of cancer cells in blood requires large, expensive equipment run by highly skilled technicians, and it can take a long time to conduct a single test,” said Leidong Mao, assistant professor in the College of Engineering and member of UGA’s Nanoscale Science and Engineering Center. “We are working on a device that is simpler, faster and much cheaper to build and operate.”

Mao’s testing apparatus starts as a small silicon wafer similar to those used in computer components. They imprint a special pattern on the wafer using specialized equipment in UGA’s nanotechnology clean room, and transfer this pattern to a clear plastic device containing a series of small magnets and extraordinarily thin channels through which they can inject blood samples.

The blood sample is combined with a mixture of magnetic nanoparticles made of iron oxide, which interact with the cancer cells and push them aside as they pass the magnets in the device. Once the remainder of the blood is flushed out, the researchers are left with a very pure sample composed almost entirely of cancer cells.

The whole device is smaller than the average cell phone, and the raw materials for each unit cost less than $1.

“It really is like having an entire laboratory on a microchip,” said Mao. “We can filter out incredibly small numbers of abnormal cells using very little blood.”

If the technology proves successful, Mao hopes that it may one day be deployed in clinics and hospitals throughout the world, particularly in developing countries where access to advanced laboratory tests is extremely limited.

He also hopes that collaborations with scientists in biology and chemistry will reveal other ways in which the device might be used. For example, it might be possible to detect viruses, bacteria and parasites using a similar approach.

Ultimately, Mao is optimistic that he and his fellow researchers can find the solutions necessary to take the device out of the laboratory and into the marketplace, where it can help doctors treat patients more effectively and prolong lives.

Research described in this story is funded through a grant from the National Institutes of Health under award number 5R21GM104528.