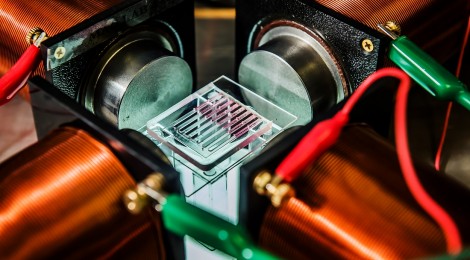 Athens, Ga. – Researchers at the University of Georgia and their collaborators have developed a new technique to enhance stroke treatment that uses magnetically controlled nanomotors to rapidly transport a clot-busting drug to potentially life-threatening blockages in blood vessels.

The only drug currently approved for the treatment of acute stroke—recombinant tissue plasminogen activator, or t-PA—is administered intravenously to patients after the first symptoms of ischemic stroke appear. The protein in the drug dissolves blood clots that cause strokes and other cardiovascular problems, like pulmonary embolisms and heart attacks.

“Our technology uses magnetic nanorods that, when injected into the bloodstream and activated with rotating magnets, act like stirring bars to drive t-PA to the site of the clot,” said Yiping Zhao, co-author of a paper describing the results in ACS Nano and professor of physics in UGA’s Franklin College of Arts and Sciences. “Our preliminary results show that the breakdown of clots can be enhanced up to twofold compared to treatment with t-PA alone.”

By collaborating with their medical partners, the researchers tested their approach in mice that mimic blood clots in humans. Once a clot was formed, they injected a mixture of t-PA and a small number of magnetic nanorods only 300 nanometers in diameter. By way of comparison, a single human hair is about 80,000 to 100,000 nanometers wide.

Upon entering the bloodstream, the nanorods are activated by two revolving magnets, which make the specially designed particles rotate not unlike a series of small fans, pushing the drug to the site of the clot.

Stroke is the second leading cause of death worldwide, according to the World Health Organization, while the Centers for Disease Control and Prevention estimates that one American dies from stroke every four minutes.

One of the most significant risks of t-PA treatment is uncontrolled bleeding. While the drug may successfully dissolve dangerous clots, it also temporarily prevents the formation of clots throughout the body, making patients vulnerable to hemorrhage.

“We want to improve the efficiency of this drug, because too much of it can lead to serious bleeding problems,” said Rui Cheng, paper co-author and graduate student in UGA’s College of Engineering. “This approach may one day allow physicians to use less of the drug, but with equal or improved effectiveness.”

The research team plans to continue its investigation using nanorods made of new materials that are more compatible with the human body, but they caution that these results are preliminary, and more research must be done to perfect the technique.

“We also want to develop a chemistry model to illustrate the relationship between clot dissolving speed and other experimental parameters,” said Weijie Huang, graduate student in physics at UGA.

“With further development, we think this could be an important step to better treatment of clots in small blood vessels,” Zhao said. “Our team is already working on new approaches to take this proven concept further.”

Tags: Lab on a chip, Magnetism, Microfluidics, Nanorod, Nanotechnology, Stroke
← A lab in the palm of your hand
Focus on Faculty – Leidong Mao →